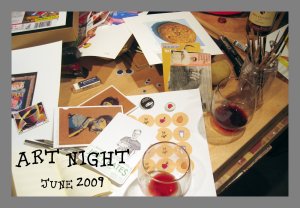 Art Night is a group of Artists (capital A) who meet on Thursday evenings to create, discuss and gossip about Art (another capitol A). The idea came about when the original members (god only knows who they were or are anymore) felt day jobs and other responsibilities were making the making of Art a tad too solitary. The idea was to put aside one night a week where we could get together and give ourselves an evening of making art and cover some social bases at the same time. Wine and beer were not just allowed, but actively encouraged to lubricate the creative process. Going back at least six years now, the original group was small, numbering around eight members. Since then the group has grown in size to over forty people “officially” on the Art Night list. To be fair, not everyone on the list has actually participated in Art Night in any way other than being on the list, but there is a group of 25-30 people who regularly attend a Thursday night. The more likely gathering consists of 10-15 core members who bring something to work on that evening.
This is about as casual an art group as is possible. There are no dues, no selection process (another member’s word is good enough), no adherence to a particular school of thought, no stylistic restrictions and not even a requirement to participate. This, of course, leads to the question “What do these people have in common?” and the answer is “Not a bloody thing!” barring the desire to make art and the commitment to support others in doing the same. It’s a big art world (small a) out there and there is room for many approaches. There is, however, safety in numbers.