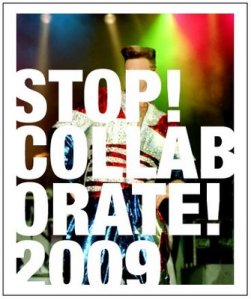 STOP! COLLABORATE!Featuring: Eric Osborne, Matt Calcavecchia, Nate Stottrup, Marty Gordon, Stefan Caswell, Mara Rivet, Justin Hillgrove, Jessalin Beutler, Mark Gunderson, David Enriquez, Brad, Strain, Clare Bowers, John Osgood, Debbie Bianchi, Stephanie Doll and Todd Karam.
The first annual “Stop! Collaborate!” show, curated by local artist Todd Karam. This is one-of-a-kind opportunity where 16 artists from Washington and California collaborated with each other. Of course there’s a twist. Each participating artist contributed one of their own “completed” pieces. After drawing names from a hat, another artist from the group then took the once completed piece to expand on it. You ask “..but, but will they respect the work of the other artist? Is this normal?” The answer is, “who knows.” Slide, roll, dance, jiggy, jump, run, skip, breakdance, moonwalk your way to Twilight in West Seattle. Whatever you do, don’t miss this one-of-a-kind show! Erik Chillman and dj Joel Dipietro will be spinning during the opening so bring your dancing shoes and props, if you plan on becoming more than a spectator. Dance music, and old hiphop/funk party stuff!