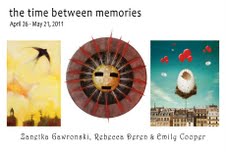 ArtsWest presents the new gallery exhibition The Time Between Memories featuring artists Emily Cooper, Rebecca Deren, and Zanetka Kralova Gawronski from April 26th through May 21st. Decidedly placed on the side of fantasy and fiction, these artists provide a colorful flight of the imagination to the gallery walls.

Zanetka Gawronski’s early immigration to the US from Slovakia greatly influenced her perception of the world and, therefore, her art. A painter for more than twenty years, she holds a BFA from Pennsylvania Academy of the Fine Arts and has worked widely in the arts including creating children’s museum exhibit designs and book cover illustrations, to working on the fabrication team for Nickelodeon Network “Blues Clues,” “T.V. Land” and the “Big Help Mobile.” Her paintings in the current exhibition shimmer with romantic dreaminess of a time when people rode unicycles and hung their fancy dresses out to dry.

Rebecca Deren creates masks from gourds that are inspired from her experience of living several years on the island of Kauai. With precision and exceptionally creative use of feathers, shells and other objects, she carves and cuts away the shapes and lines that ultimately convey her joyful personifications of Poseidon, the god of the sea; sun god, Ra and other mythical beings. A self-taught artist, she began creating art at age ten and has spent many years exploring various techniques. Her artwork has been featured in many exhibitions and festivals in both Hawaii and Washington.

Emily Cooper joins us from Vancouver, BC for her first exhibition in the US. In a very brief time after receiving a BFA from Sheridan College in Ontario, she has exhibited her digital composites across Canada with a four page spread and a cover art feature in Lucid Media Magazine, as well as a double page spread in PhotoEd Magazine. With surrealist zeal, her own photographs of red balloons, castles, penguins and rooftops from across the world are cleverly combined with vintage photographs for a willing suspension of disbelief.

Scott Schuldt projects his video, The View from the Canoe, in AMP at ArtsWest throughout May. Funded in part by a 2010 GAP Grant from Artist Trust, the project is a documentation of the waterways in and around Seattle from inside Schuldt’s canoe. The ongoing project began in 2008 and explores the details of “wilderness” in an urban setting. With a focus on Union Bay, he reflects on its history and the present-day reality of canals and pathways used by people and animals alike.

Since meeting the artists and talking about their ideas is just as much fun as seeing their artwork, join them at their opening reception. ArtsWest is to host an Artists’ Reception for the opening of The Time Between Memories on Thursday, May 12th, from 6:00 to 7:30pm during the 2nd Thursday ArtWalk. Lively conversation and light hors d’oeuvres will be provided courtesy of ArtsWest. Admission, as always, is free.